← Back to portfolio
Published on 8th October 2014 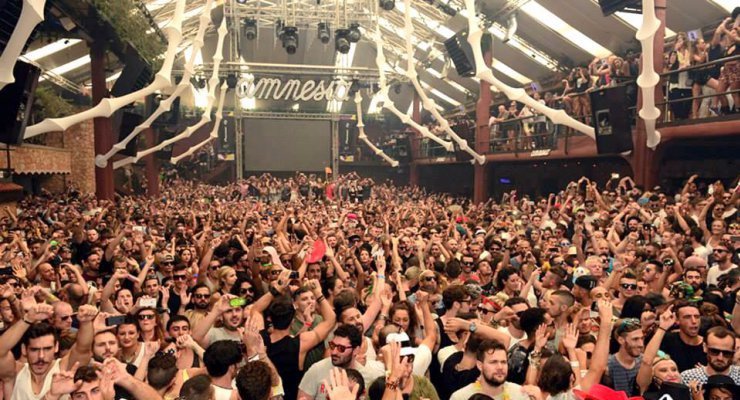 Sadly, one of the best ways to kill a party is to look forward to it for a year. Amnesia closing is built up as the celebration of the season in the rave-hearts of many Ibiza die-hards, and not without good reason. Almost every year it has delivered a celebration of loose, loud and ludicrous proportions – the ludicrous angle in large part down to its irregular afternoon hours and the array of colourful Ibiza characters who converge from all craggy corners of the island for the occasion. So thanks to its excellent and deserved reputation, our expectations for this party are always very high, and our critiques perhaps harsher than usual when it fails to deliver.

After an irregular breakfast of pancakes and beer, we stumbled into Amnesia at a bleary eyed 6am to find tINI in a darkened terrace. The massive room wasn’t as well suited to her as intimate clubs and beach bars and, though she held her own, most of the energy was next door. One big positive to come out of the closing is that the main room has officially regained its clout, with the nocturnal portion of the closing now a competitively strong aspect of the party. Joris Voorn had control when we entered, playing a more melodic, animated set than I was used to from the tech-house home slice. I smiled when he whipped out The End – Hot Since 82 and Joe T Vannelli, as the smooth string section was exactly what I could stomach at this point. The main room crowd was as lively as I’d seen it all year, starting a successful sit down that even the Amnesia dancers got involved in.

We ventured back to terrace once Mar T took to the Amnesia throne, playing his usual clipped and jumping beats, including one of the biggest tracks of the season, Patrick Topping’s Forget. Around 8am Hot Since 82’s producer presence was felt yet again, when Mar T dropped Somebody Everybody (which we would hear again later at Capriati). It was the perfect song to build excitement for the transition from night into day on the terrace – a phenomenon few know better than Amnesia manager and resident Mar T.

Seth Troxler and Eats Everything rolled in for a back-to-back set around 10 which didn’t immediately have the spark I was looking for, so I took the opportunity to see what Capriati was up to in his home away from home, Amnesia main room. It’s been a big year for Capriati – he has been the driving force behind the revival of the main room (which in recent years has been superseded by the pull of the terrace) and in that space his pulling power has snowballed.

Back in the terrace the scene was finally getting weird like we wanted it too. Troxler had a tall bishop’s hat on, Eats Everything peered out from under a silver seeweedy wig, colourful top hats were squirting forth from the booth into the crowd and I spotted a unicorn-woman hybrid up in VIP; Amnesia closing was coming into its own. Troxler and Eats were growing more daring and eclectic – mixing Laurent Garnier’s string-heavy summer hit Enchanté into a retro jacking house number, whilst graffics of questionable '80s video clips danced across the LED screen at the back of the hall. The tunes were improving by the minute when a blow fell which coloured the rest of the closing – we lost the deep end of the speakers.

The music was still loud and clear, but had lost that crucial ‘oomph’ which blows your mind and rattles your chest when you hear your favourite song. It’s absolutely critical to a party like this and as more punters began to notice the change dismay spread throughout the room. Fortunately the pair were still on fine form, dropping the housey closing party favourite Floorplan (aka Robert Hood) Never Grow Old, preceded by ethereal opera breakdowns and bluesy vocals to choppy house beats.

Maceo Plex arrived just after 12 and squeezed all he could out of the handicapped speakers with his dramatic, deep sound. It definitely sounded best during his set, but I couldn’t get past the fact that with all his amazing tune selections, we could hear it perfectly, but we just really feel it. Nonetheless, Maceo was brilliant: diverse, cinematic, bold… everything you want from a closing party and, for the second year in a row, it baffles me why, with his immense popularity and imaginative and powerful style, he isn’t billed as the final act. Conjure Balearia reappeared, reminding us all of the magical moment we heard it for the first time at last year’s closing, tune of the season Moderat’s Bad Kingdom (Marcel Dettman remix) got a look in, as did more unusual numbers like a remix of The Smiths How Soon Is Now and monster classics like a slowed down Hale Bopp – Der Dritte Raum.

When Luciano and Ricardo Villalobos swayed onto the scene they pulled the energy back slightly with a rolling tech house track. In normal circumstances this would simply be considered warming into it – but for most people still raving at 2:30 in the afternoon on a Sunday (of which there were many – Amnesia was packed until the bitter end) any sort of wind-down in the music flow isn’t entirely welcome.

I loved the back-to-back focus for daytime – this is exactly the right vibe for Amnesia closing - but the pairings must be chosen wisely. Eats and Troxler worked (both extremely lovable fruitloops) but Luciano and Villalobos didn’t have the same natural rapport. Whilst there were definitely some great tracks in the mix – especially the jazzy numbers from Villalobos, it didn’t have the daring spark of the previous two sets and that, mixed with the ongoing sound situation meant that the party’s climax had come and gone.

All this said, it’s very difficult not to enjoy Amnesia closing: I had a ball roving through the crowd as the glitter baron (gold or silver, friendly stranger?) sharing slinky toys with friends and generally raving like a bandit. But I had looked forward to this all year, and anything short of the party perfection I had experienced in the past wasn’t going to live up. Next time, Amnesia!