Face It - Silent Discos Are Where The Party Goes To Die. Slowly. 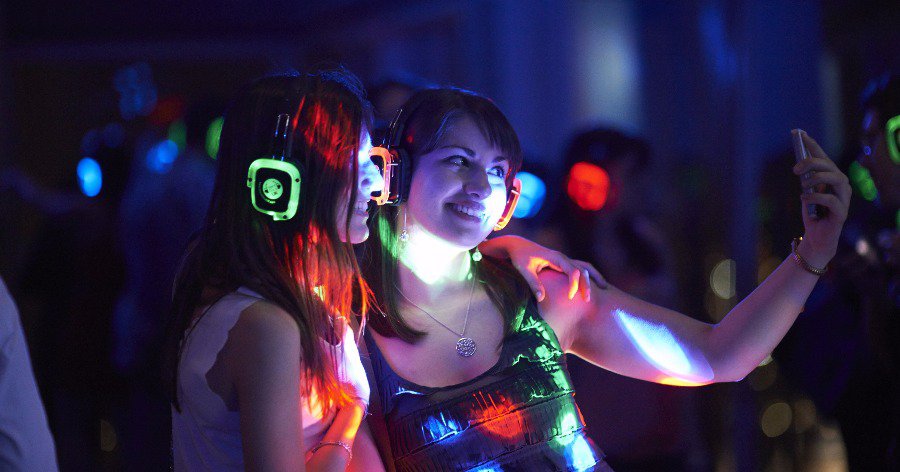 It’s time to end the charade and face the lack of music. Let's stop pretending silent discos are a good time and recognise them for the depressing exercises of gimmickry they are.

The silent disco trend has been quietly (very quietly) creeping its way into Sydney’s regular entertainment schedule and, preying upon our nightlife weaknesses in a post-lockout world, is now touting itself as a legitimate night out. This vexes me.

Some organisers seem to think that the shared experience of loud music can be replaced with the thrill of dancing in an unlikely venue; that punters will be so dazzled by the titillation of a “disco” at the top of a very tall tower, or in some dusty corner of a museum, that we won’t notice the most important ingredient is missing.

It's getting out of hand. Well known party promoter Sea Live* is running a series of silent discos at the Sydney Aquarium. This means that at some point, someone with financial means said to themselves, “you know what this dance floor needs? More fish.”

I don’t know why this is happening in the first place let alone why so many of my friends have declared themselves facebook-interested, but I do know that in refusing to attend these “discos”, citing moral outrage, all I have missed is some headphone-encumbered head banging to ‘Smells Like Teen Spirit’ before an audience of slightly stressed turtles.

*on closer inspection these guys know nothing about throwing a party. There are two kinds of silent discos in this world and both are equally unappealing in their own special ways.

Firstly, there is the multi-track silent disco, which is the domain of both pseudo-parties like the above and festivals, from the internationally acclaimed mega-event down to the inbreeding grounds of your local yokel county fair. The multi-track disco allows ravers, once shackled with the tiresome headgear, the illusory freedom of selecting their own channel of pre-recorded mix, featuring anything from Art Department to Aerosmith.

Never mind that you haven’t been into choose-your-own-adventure entertainment since you were 10. Never mind that the whole point of a dance floor is the sense of community fostered by listening to the same tune at the same time. Never-fucking-mind, guys! ‘Cause you can choose your own music just by fiddling with a button on your ear! Just like you do with your smart phone on the train! Rave on.

The R’n'B listener grinds up against the crotch of an ‘80s ballad karaoker as he bellows his aria in the face of a deep house shuffler who treads on the toes of an indecisive music fan who stands motionless in the middle of the dancefloor, flicking robotically through the channel cycle as if she’s scrolling Netflix Most Popular. It’s goddam anarchy, and not in a Sex Pistols way.

Then there is the other form of silent disco, nobly intended yet inescapably depressing, which is played out in regular bars and clubs. Here there is but one DJ, mixing from his booth as usual, to a head-phoned crowd all moving to the same, sad beat. Why is it a sad beat? Because this kind of silent disco never meant to be a gimmick. It’s a last, gasping attempt at real nightlife from a proprietor slapped with over-zealous noise restrictions - and usually the only means by which a venue can continue to operate past a certain hour. Yes, this disco has a legitimate sob story behind it, but just like that guy on reality TV with one arm, no family and seven types of cancer, that doesn’t mean we should give it air time.

Anyone who has accidentally stumbled into a silent disco on their weekend session will know it makes a truly terrible first impression. Allow me to paint a picture.

When smoking was banned from entertainment venues, its absence suddenly exposed a dark underbelly of aromas like tall-man-arm-pit, shufflers-foot-stank, sly-fart and the ever pungent liquid-gold.

Similarly in the absence of loud music, upon walking into a club in the uncomfortable throws of a silent disco your ear drums are confronted with the venue’s background noises, usually overwhelmed by a pounding 4/4. It aint pretty. The scraping of chairs, the slurred sound of someone ordering their 11th rum and coke, the swish of cheap pants, the hacking cough of the guy who’s been out for three nights, and that one douche-swab who forgets to take off her headphones and persists in shouting her conversation to a neighbouring punter. These sounds form your sonic mis-en-scene, and they aren’t even the worst of it: imagine the horror of realising you just let rip in a silent club.

Aesthetically, it’s just as much of a travesty. There the DJ stands between solemnly muted speaker pillars. There before him the dancers waft aimlessly, somehow stripped of their confidence to dance with energy. The DJ tentatively raises a flaccid salute as the bass ‘drops’, dancers on the floor seem unsure whether to make eye contact or not.

Until you don those hair flattening headphones you are faced with the grim reality. Everyone looks like a dickhead, their dancing rendered impotent by the lack of accompanying music. After all, a bass face without bass is just an ugly face, and a techno fist pump without a kick drum is downright aggressive. A twerk without a tune is vaguely rapey and a tech-house hand flick without a hi hat is essentially just shaking your wet hands as you walk out of a public bathroom where the dryer is broken and the paper towels have run out.

Awkwardly dancing around to nothing, the crowd seems like a bunch of television extras having it large at Lassiters on the set of Neighbours. You get the feeling someone with a headset is going to come out from behind the booth and yell “CUT” and everyone will walk off the dance floor to nibble on some break time sandwiches. But there are no sandwiches. The silent disco DJ wears a brave smile but in reality is ready to end it all at any moment. Trapped in a torturous purgatory, he is compelled to maintain the illusion of a good time whilst simultaneously being aware that literally no one is buying it. A yawn is suppressed just before the drop. A hand rubs the eyes. No, the set is not over yet.

Finally, we come to the clientele themselves. For 90% of its attendants, this silent disco is the last resort - and even then most will choose to simply call it a morning, or bring the party to the comfort of their own homes rather than suffer this pseudo-rave of enforced schtum. This means the vast majority of people are at the silent disco because A) they’re still chewing the cud like its 1999: foot tapping, pupils popping, ready to befriend a lamp post or B) they don’t have a high enough quantity or quality of friends to substantiate their own kick on. These people are not ideal.

This silent disco is a powerful symbol of defeat. Even after you give up and leave, the negativity lingers like a bad smell, or a bow shaped tattoo on your lower back which you have paid hundreds of dollars to remove but 7 laser sessions deep and your dumb decision is still pretty fucking obvious. This is the lasting, damning imprint the disco experience will leave on your weekend if you let it be the last thing you do.

No matter what way you look at it, silent discos are where the party comes to die.