← Back to portfolio
Published on 18th January 2017

“We will go as far off topic as you’ll let us,” quips James Lyell of Flight Facilities as I catch up with the duo at a pub in Camperdown. And he’s definitely not joking, since we’ve just conversationally meandered our way from - try and follow me here - the awkwardness of photo shoots, to the significance of visual aids to music, to being recognised on the street, to that time Hugo Gruzman’s cousin spiked him with acid in Byron and he got ‘star spotted’ for the first time by some fans whilst walking alone in the dark on the beach in a desperate attempt to claw back to the land of the reality. And I’m only two questions deep.

Conversation with Jimmy and Hugo is nothing if not entertaining - and gives away quite a lot about their musical partnership too. They are full of energy and ideas, from the trivial and obvious to the deeply conceptual. They’re also natural entertainers, bouncing off each other to push the conversational (or creative) flow forward and - as clichéd as it sounds - often finishing each other’s sentences.

It’s been more than a decade since Jimmy and Hugo bonded over mixtapes and hit the back rooms of Sydney’s Kings Cross as an electro and disco loving duo with an aviation aesthetic - and in that time ‘Flight Facilities’ has become a household name in Australia. Flight Facilities headline our festivals, are splashed across our music media and collaborate with our finest orchestras for concerts which sellout our largest and most prestigious event spaces, like Melbourne’s Myer Music Bowl, the Sydney Opera House and The Domain.

“It's ridiculous to think that we’ve ticked off one of our dreams to play with an orchestra, Jimmy muses. “I don't know how we - I'm gonna say it - orchestrated that.” (Woahh, did that pun just happen?) Despite this achievement, and the duo’s undoubtedly dominant presence in mainstream youth music culture, Flight Facilities don’t consider themselves to be ‘Domain level’ acts. “I still feel like both the orchestra and circumstance has a lot to do with those things,” Jimmy acknowledges. “I by no means think that we are a Domain-sized band.”

It’s not merely false modesty - he makes a fair point. FF’s music has connected with an awful lot of people, but in many ways they are still in the early evolution of their creative careers. Receiving the ‘orchestra treatment’ after only one album is rather unusual, after all.

“You can let your head get big for a second after a Domain show but it'll get popped straight away when you go back overseas and you're back to the bottom of the rung,” says Jimmy. ‘Which is a really healthy thing.” 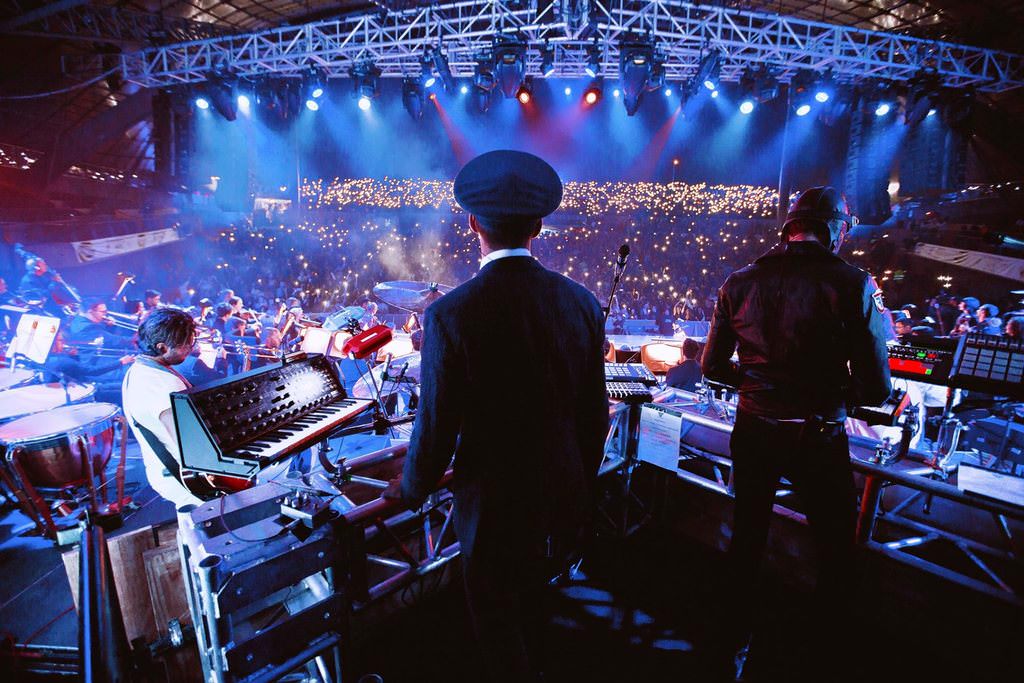 So they’re not about to get ahead of themselves but, at the same time, the opportunities playing gigs of such scale and circumstance are not lost to the young creatives.

Jimmy: “Having been given the opportunity to see 15 000 people react to our music at once, it does give us some insight into different ways to write. It’s such a cool thing that we've been given that chance.”

Hugo: “You write from a different perspective. We think a lot more about live than ever before, for better or worse I guess.”

Jimmy: “I wonder if we were an album selling band, you know, back when albums were selling, if we would have structured our music to listen to more than to play out live…”

It's not merely the focus on live shows that has influenced the duo’s production tactics; their exposure to the world of classical instrumentation has also left its mark.

Hugo: “You do this orchestra stuff and suddenly you want everything to be orchestra related and you need to pull yourself back and go, no, we are still rooted in electronica, we can't completely destroy the fabric of what we were.”

Jimmy: “I guess that’s how most creative evolutions happen. You go too far one way then you pull back and it evens out. But it's really fun going too far the other way too…”

Hugo: “You learn the possibilities and the boundaries -”

Jimmy: “- by breaking them. After we started writing the orchestra stuff probably the next four songs we wrote had strings in them. We kept yelling, ‘put strings in this!’ But eventually we pulled back and returned to electronica.”

It’s unsurprising to hear the boys talk about their creative process in this way. Within their debut album, ‘Down To Earth’, you can hear evidence of the musical tangents they must have charged down that led them to the final product (like their conversational tangents, only mastered). Take the sunny hip hop tilt of ‘Why Do You Feel’ feat. Bishop Nehru, or the the unapologetic retro funk-fest that is ‘Sunshine’ feat. Reggie Watts. Each track nods to a myriad of influences which have been reigned back in under a smooth and soulful Flight Facilities wash. The ‘tangents’ may be safely packaged for now, but they hint at different roads the duo could divert down in the future. 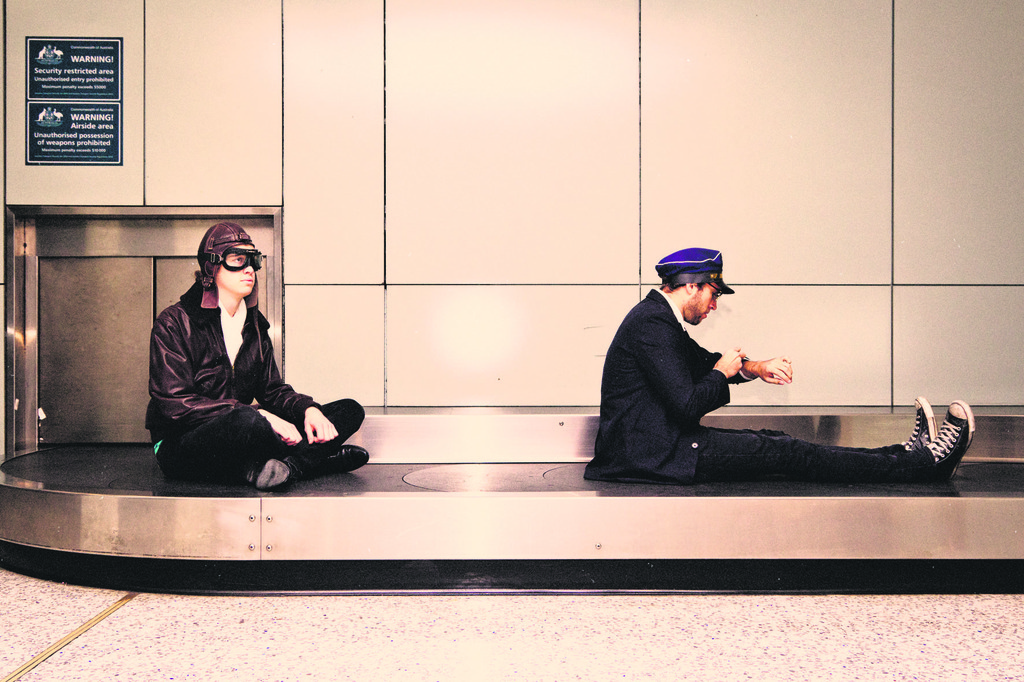 Whether it’s a body of work like the album, or the impressively crafted Decades Mixes (which resonated so widely that they travelled to house parties half way around the world long before Flight Facilities were the name they are now) Flight Facilities’ works are created with attention to detail and respect for the way musical ideas hang together as a whole.

“We treat an album like a song,” explains Hugo. “We did every release so meticulously that when we put together an entire album we wanted it to make sense the same way a song does. Every section joined together has tried to be as seamless as possible so it feels really smooth to listen to.” Like the decades mixes, the album is rich in spoken word samples, which add colour, continuity and purpose to the music.

Ever the cultural referencers - be it diving back into their musical history with a Fleetwood Mac cover, or creating a surprisingly sensitive visual packaging of 2016’s dramatic events - at least, those which resonated particularly with them and their audience - this cultural placement is part of the duo’s success. FF come from a position in the world which is familiar to most of their fans; they are inherently relatable. And when they create music, they put it in a cultural context that other young Australians can connect to.

"We're both extremely conceptual human beings,” Jimmy says. “I reckon our mums would have wanted to kill us because we asked them ‘why’ so many times. And we asked ourselves that all the time too. Why? Why? So you have to create a start, middle and end to answer that. Music is a narrative, it always has been.”

With questioning minds, come opinionated ones. Jimmy and Hugo had plenty of entertaining social commentary to offer during our chat, not all of which was on the record - a safe enough distinction during a professional interview, but a more treacherous path to navigate when it comes to the fickle tides of the internet. Understanding how to tailor what you say whilst still being genuine is clearly an ongoing learning process.

Hugo: “You've either got to have total conviction about what you do, or say nothing at all.”

Jimmy: “Up until recently we've been very safe about things, but I feel more and more being given the chance to have a voice we want to voice it on the right subjects.”

Hugo: “Yeah there's a value to a brand - you can leverage in the name of something. People want to read something controversial or something personal - that is celebrity culture and we're not going to get a tenth of that - but you do realise the value in your own brand when someone is trying to tear it down.”

Jimmy: “Or just tear you down as an individual, via your brand.”

Hugo: “You become synonymous with your brand straight away though obviously. That's how they validate the attack, by dragging in the most successful element of what you've done. So you've got to pick your battles pretty carefully. For something as obvious as politics no matter who seems like the right choice you're still going to alienate half your audience if you try to get involved, so sometimes it's better just to say nothing.”

Only a few days later, FF broke their own rule in a lengthy facebook post commenting on the reception of the American election results. They were essentially making a point about taking the time to understand alternate views which, ironically, many failed to understand properly before lambasting the duo for the political position they were perceived to have taken. 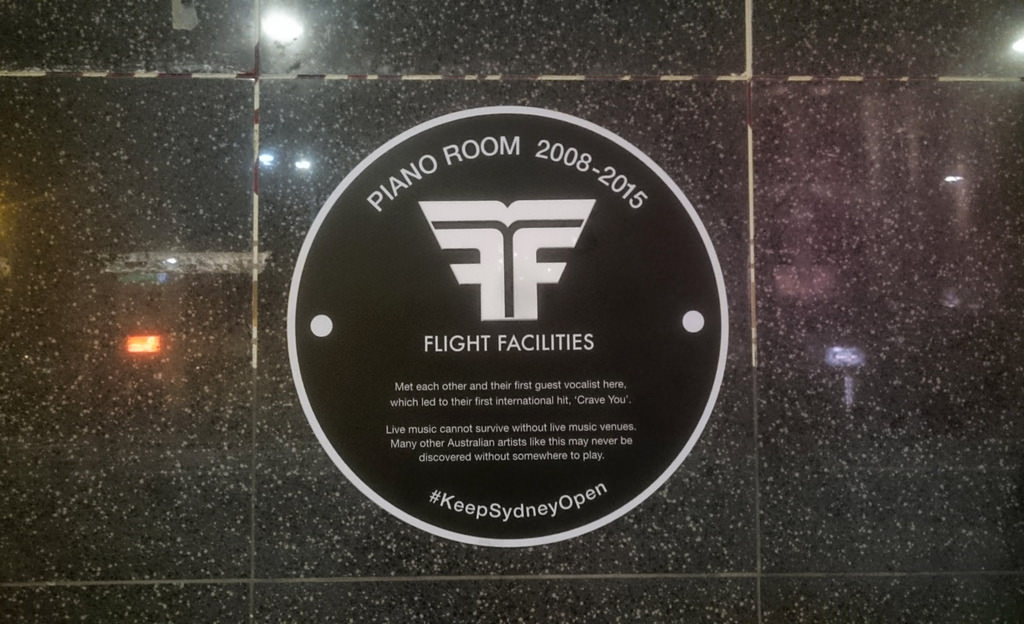 So the learning process continues for Flight Facilities, as their creative success comes hand in hand with the blurring of their position as private citizens and a commercial brand with considerable platform. This Saturday they’re getting political, but in the safest way possible - the peer approved pastime of Baird bashing and lockout protesting. “He made an attack on our industry so we have an obligation to stand up for it,” explains Hugo.

Whatever social media pitfalls, it’s clear the boys have their hearts and heads in the right place. And whilst they care about the issues of our time as much as anyone else, the keyboard warriors determined to take them down a peg would do well to remember that Jimmy and Hugo are in no danger of taking themselves too seriously in the first place. Across the bar table Jimmy collapses into chuckles when reminded of his one-time proclivity to ‘sleep kissing’. “Yeah I was kissing Hugo in my sleep, on the neck. One time in the early days when we were bed sharing in a hotel room.”

“He rubbed my back with his thumb,” Hugo slyly elaborates. “Put his hand on my back and gave me a little reassuring - ”

- at this point Jimmy makes a mad dive for my recorder and switches it off.