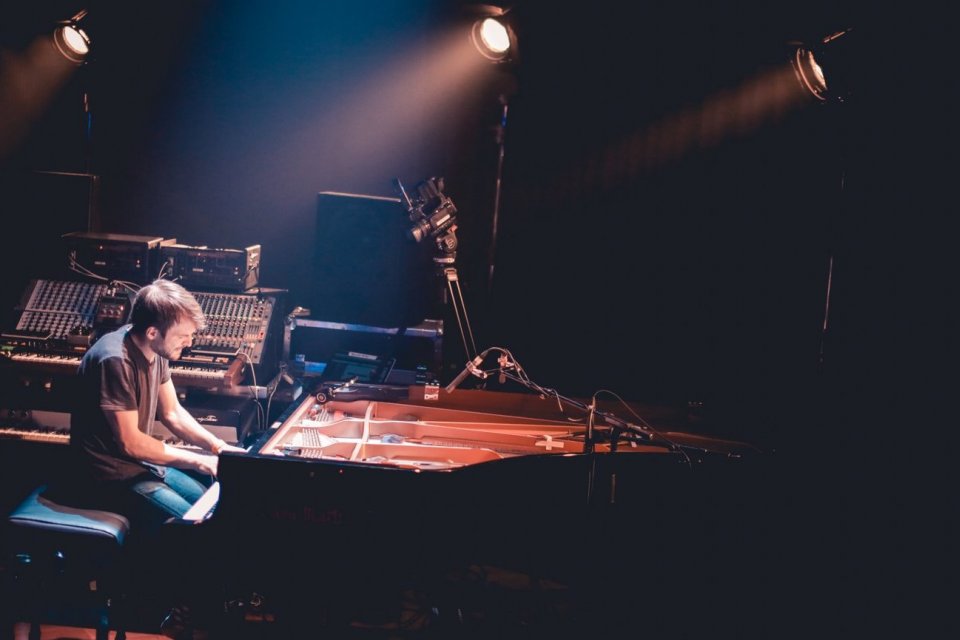 As I watched bare bottoms and splayed hands pressed in changing patterns against a frosted glass wall whilst waiters carried sushi resting atop tiny plastic chairs out to the dinner tables, I formulated the wild assumption that this would be a night out of the ordinary. To preface the main acts, new kid on the nightlife block, Heart, entertained with shiny steel-plated actors jerking their way in and out of secret doors, trench-coat wearing acrobats leaping to attention and naked, writhing interpretative dancers just out of reach. ‘Performance art’ can be a bit of a dirty word but, unlike that high school performance where my slightly manic drama teacher forced me to interpret the creation of chocolate through movement, this was extremely well executed.

Around 12:30 and with absolutely zero ado, Nils Frahm began, nestled amidst five different sets of ivories and a great slab of effects hardware. The gentle rippling of Says filled the room, hypnotising those listening with a gradual and satisfying swell of layers that peaked with the introduction of a thunderous growl that shot straight to the heart; music-porn at its classiest.

The performance itself was off to a soaring start, but it wasn’t all gravy. Heart has some kinks to iron out in its set up, with those who weren’t at dinner pinned to the sidelines by a velvet rope, suffering a poor view whilst many of the diners in prime position chose not to be engaged. When an artist is playing through a curtain of dripping sweat from his exertions on the piano - you’d think the conversation could wait.

Fortunately for those paying attention a Nils Frahm performance will very quickly take you out of your thoughts, the room and reality altogether. Those at the front stood glassy-eyed and captivated as he raced between sets of keys, bridging any perceived gap between the electronica and classical piano world with his very body, often playing both the grand piano and synthesiser at once and quickly flicking switches between broken chord patterns to create an undulating swell of trance-inducing sound that had me a couple of minor chords short of appreciative dribbling.

Frahm dashed between instruments with only one shoe over his colourful socks, a taste of the vibrant creativity beneath his shy exterior. As an odd sock wearer, I know well the freedom that kind of dissonant footwear can bring. Freedom even, to break from the harmonious onslaught for a percussion solo, tapping the wooden beams of the open grand with a special soft-head percussive baton that on closer inspection turned out to be a loo brush. One shoe remember? No rules.

The constantly arpeggiating keys, further smoothed out by loops and delays, created such a fluidity to his performance that it felt like blinking from a beautiful dream when the final ovation became a standing one, with Sven Väth leading the charge and calling for ‘one more tune’ from the DJ booth he had quietly snuck into towards the end of the performance. Rope removed, the front section now opened up to all as a dance floor. Initially it was a rather uninviting blank space, and I felt Väth had his work cut out for him to change the mood from hypnotic meditation to dance-floor recreation.

Opening with the slow and warm beat of DJ Koze’s XTC, it took Sven, oh I don’t know - a minute? - to fill the floor and transform the mood. Buoyed by the beauty of Frahm’s performance and skill of the DJ before us now (the eye level DJ booth was pretty baller), we danced away in the blue light to Sven favourites, the sharp slices of Mathew Dekay’s Fangtango slicing through the techno bass and housey piano riffs keeping us on our toes.

Heart is a classy joint which celebrates creativity, quality and clearly has the right idea about good music. But art is for everyone; ditch the velvet rope segregation and we’re onto a real winner.