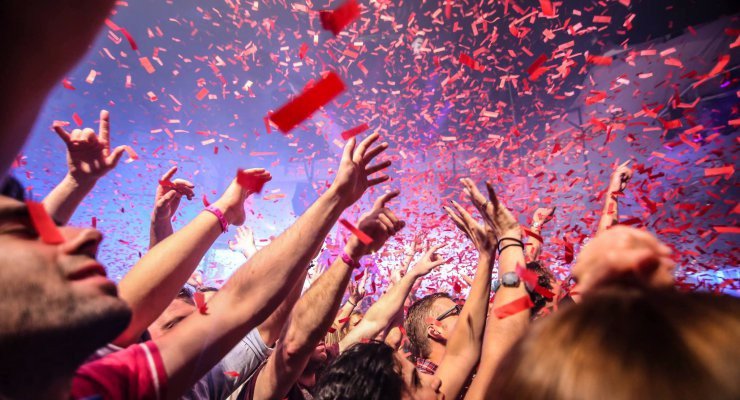 As I rounded the street corner Pacha loomed from the pavement like a radioactive angular blueberry, its equally luminous fuchsia counterpart, Pacha Hotel, challenging it from across the road. Within the blueberry block, it is an extremely multi-faceted clubbing experience, including sushi restaurant, merchandise shop, main dance floor, disco room, roof terrace, café and every manner of VIP sections you and your wallet could imagine. It feels like a many-holed warren, with each turn presenting a new opportunity to splash out. All right for some.

A small crowd on the terrace drew my attention as I explored the wealthy warren; I pushed through the scrum of salivating testosterone to find a delightful specimen of a woman splashing about in a giant cocktail glass, wearing nothing but a red bow arranged advantageously but uncomfortably (think high school wedgie, but with satin) around her person. It was pretty rad.

Down on the main dance floor Alesso had the masses in the throws of ecstasy. They presented a united fist-pumping front, going absolutely wild to ‘suped-up’ house versions of Losing My Religion – R.E.M., Promises – Nero, In My Mind – Ivan Gough and Feenixpawl and the Ibiza staple Seven Nation Army – The White Stripes. The crowd kept up a steady chorus as Alesso chewed through the commercial classics at a cracking pace. Unfortunately my ears were once more confronted with a remix of Gotye’s Somebody That I Used To Know from not only Alesso but later Pete Tong as well (Tong’s remix wins, in my opinion). It’s a gem of a song, but one which appears to be following me insidiously around this island like a brightly tessellated bad smell.

Pete Tong took the reigns around the four-thirty mark, opening well with a remix of Flutes from the new Hot Chip album. From here on in Tong saved the day for me, musically, delivering a heavy hitting tech set which still had plenty of funk and shake. Punter dance moves shifted from fist pumps to shoulder swings as Tong threw out a tasty selection of tunes worthy of a post-5am dance session, including a driving remix of Azealia Banks’ 212.

Finally, a special mention must go to the podium girls at Pacha last night. Unlike every other sparkling beauty I’ve seen across the podiums in Ibiza, these girls did not merely pose seductively, but danced the pants off the situation with genuine smiles on their faces. Nameless Dames – I salute you.