That time I sent Mum to a hardstyle festival

For several weeks now I’d really enjoyed turning down party invitations for Saturday the 17th of September, with the dramatic line, “sorry can’t come - taking my mother to Defqon”. For the uninitiated, Defqon 1 is a production-heavy hardstyle festival which started in the Netherlands, the sun-soaked shores of Australia soon proving an unlikely but secure haven for the genre so abrasive it’s been shunned by almost all other dance music fans. Worryingly, Mum was into it.

“Come on, let’s go! I don’t want to miss Angerfist!” Mum whined as I stalled our departure time, not wanting her to tire out before the finale. I needn’t have worried. My 64 year old mother danced harder than most of the kids around her and stole the show wherever we roamed. Sure, most stages were pumping out a frenetic bass line akin to the bark of a rabid chihuahua, but after the first shock to the ears Mum was all in - to the end.

Whilst I’m reasonably confident she’ll never listen to hardstyle again in her life,* her enthusiasm post event was slightly unnerving, so I had to engage in an emergency quality techno and trance education the following day just in case I’d created a monster.

*Update: she refuses to hand over the free hardstyle CDs we picked up on the way out and says (with much effrontery) that if I wanted a less encouraging appraisal of a hardstyle festival I should have asked my grandmother to review it instead. 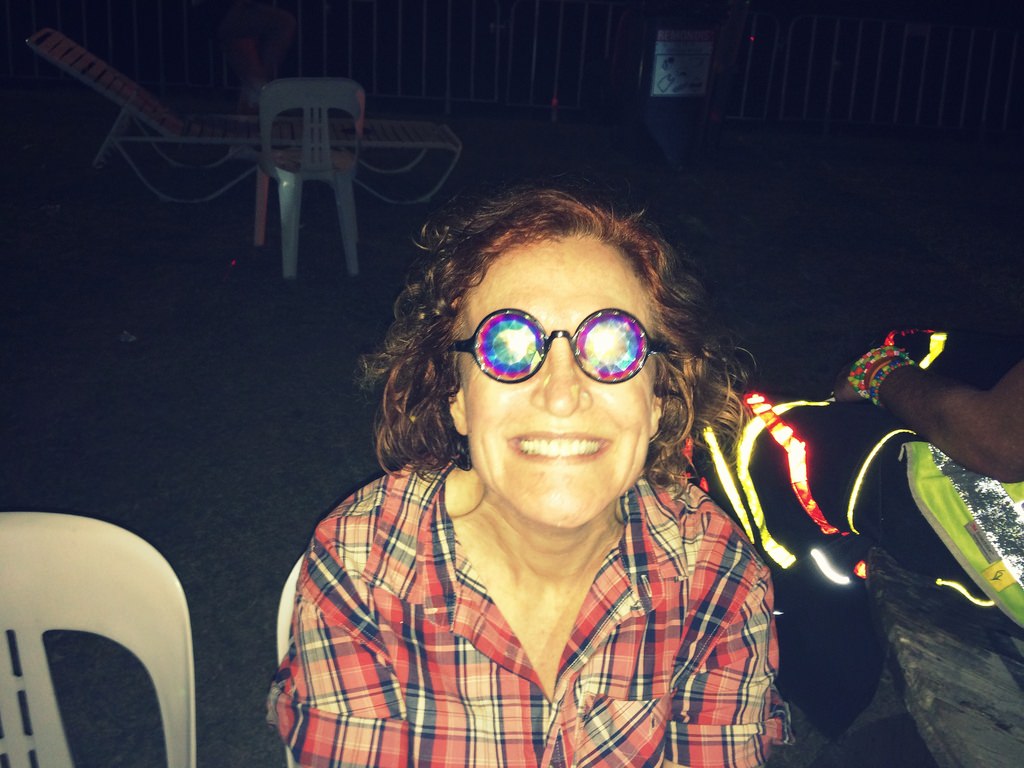 Mum sporting some glasses lent to her with the description, "hectic with the lights!"

All that hardness had me spooked. Clearly, some preparation would be necessary in order to protect the Cool Elder vibe I had been carefully cultivating since senior citizen became my mantle.

Progeny, aka darling daughter, seduced me with promises of virtuoso dancing from the devotees whose numbers have been swelling since the inauguration of the festival in The Netherlands in 2003. So far so good; the Netherlands is a country that manages to get almost everything right, (I am not Dutch) and I highly esteem modern dance styles, with zilch nostalgia for the lame dancing of my era, enigmatically called Go-Go.

My research tool was a Youtube lesson on shuffling from a sweet lass somewhere in England, however I was delighted to learn that this brilliant manoeuvre began in Melbourne, my home town. After practising really really hard for twenty seconds - I'm old, I don't have much time left - it was obvious that shuffling was a diabolical bridge too far for these old bones.

And so it was that over-excited and underprepared, except for a pack of tissues that would serve as ear plugs, I set off with darling daughter to my first ever Defqon Festival, in the sure knowledge I had peaked too early. Please refer to the shuffling practice mentioned earlier.

My first impressions were favourable as we strolled along the lake - apocalyptical sounds carried by the water - over a wee bridge to the entrance of a wonderful venue. Within a few steps the hardcore sounds of the Black Stage bludgeoned my ears while an extremely fat bass, to the point of obesity, pulsed my torso. Moreover my legs, powerless to resist this siren call, started to leap  and twist and generally carry on in manner approximating a shuffle. No really, I was to receive many encouraging compliments with not a whiff of condescension. 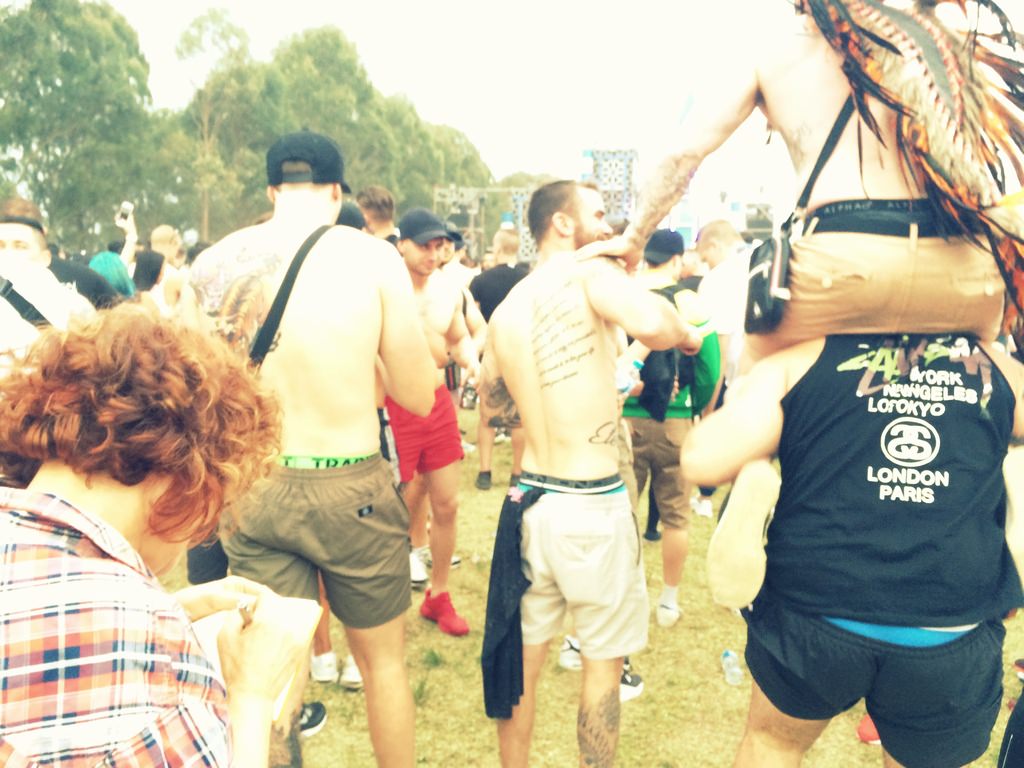 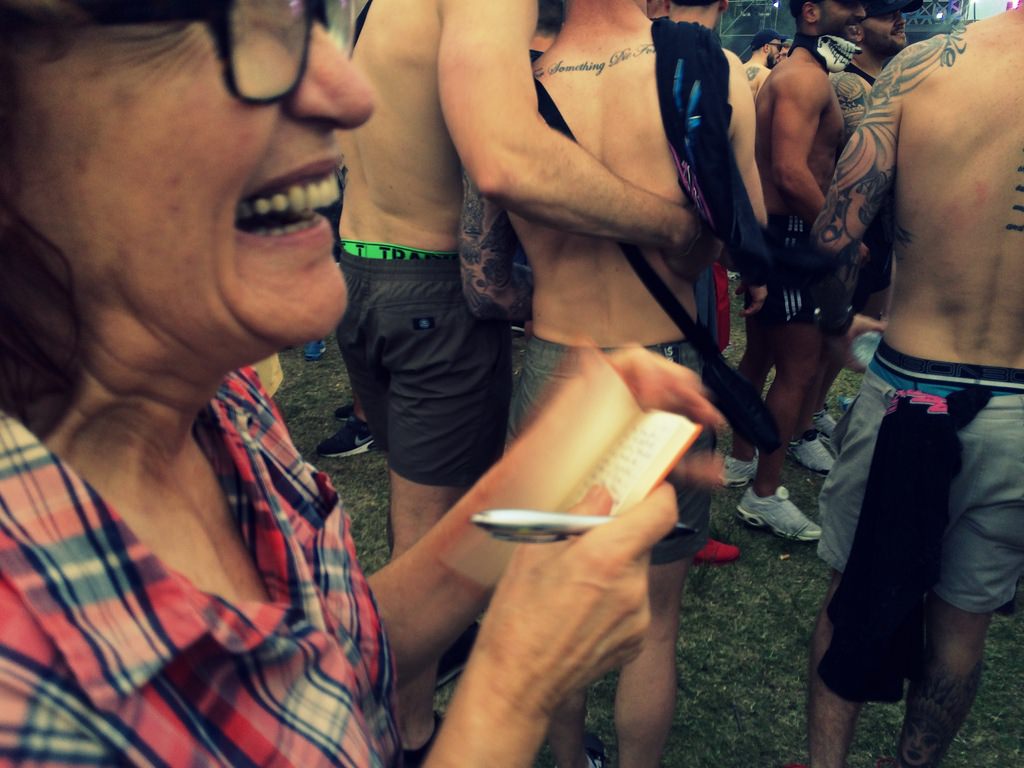 But first things first, we needed fuel, which unfortunately, is the source of my first complaint. DD had warned me against banging on about the high prices of Comestibles at Festivals but honestly, forcing a minimum purchase of $35 for 14 tokens in order to buy a 2 token bucket of chips is just plain rude. I may as well lob the next complaint out of the way, which is that all the stages were too  close together, or orientated poorly, resulting in an unacceptable level of sound bleed, cacophonous at times.

Fed and watered, we then cased the joint to familiarise ourselves with the various genres offered at each of the five stages, but alas, I was unable to properly discern the subtle, nuanced distinctions between them. I had much to learn and happily, there were many willing teachers. First was a polite young man who lamented the absence of his own mum and then asked for my 'intuition' regarding the safety of eating yoghurt at the festival. Good lord, why is there so much security here if the risk taking behaviour of today's youth amounted to consuming dairy or not? However, further along on my odyssey, I became aware of peculiar behaviour that definitely was not the result of eating dairy.

The next instruction came from a fine fellow who commended my attendance and encouraged me to stay till the end for the "old-school set with a DJ who was forty, maybe fifty years old”. This set would cover the years 2001 to 2010, the inference being that this period was more accessible to folks of my ilk. DD was also an invaluable source of knowledge, identifying something called Trap and steering me gently towards its slower, heart-friendly beat. I thrashed around like one demented in twenty second slots but eventually pouted that this music was not 'hard and fast' enough. 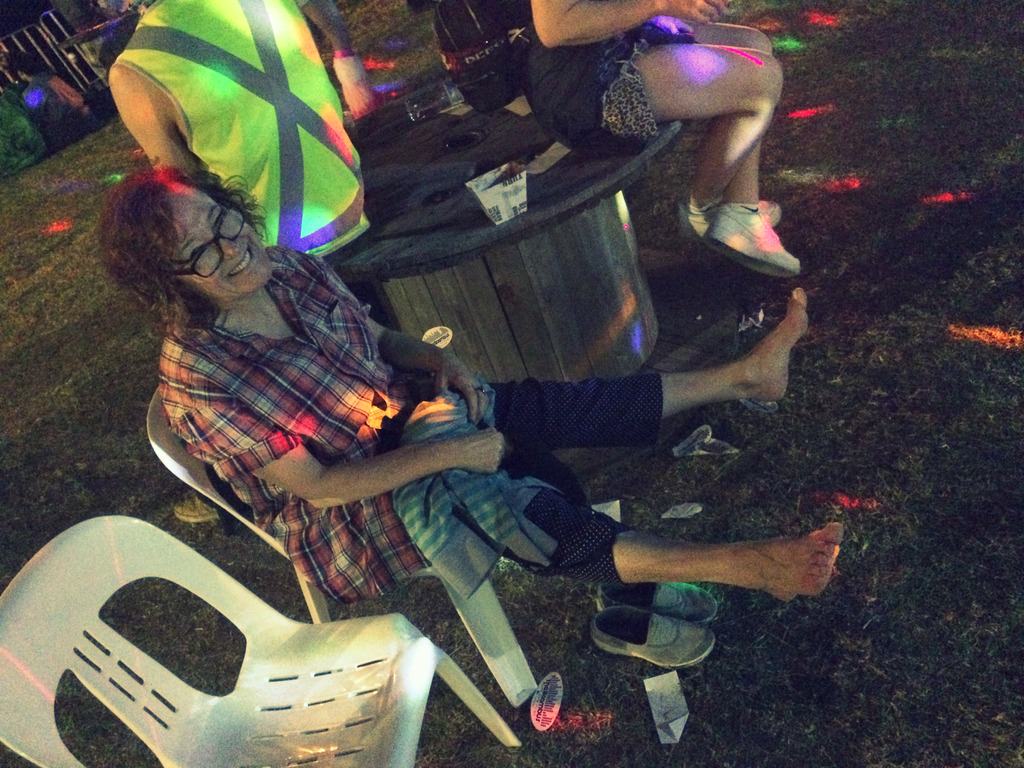 Time to rest those dancing feet 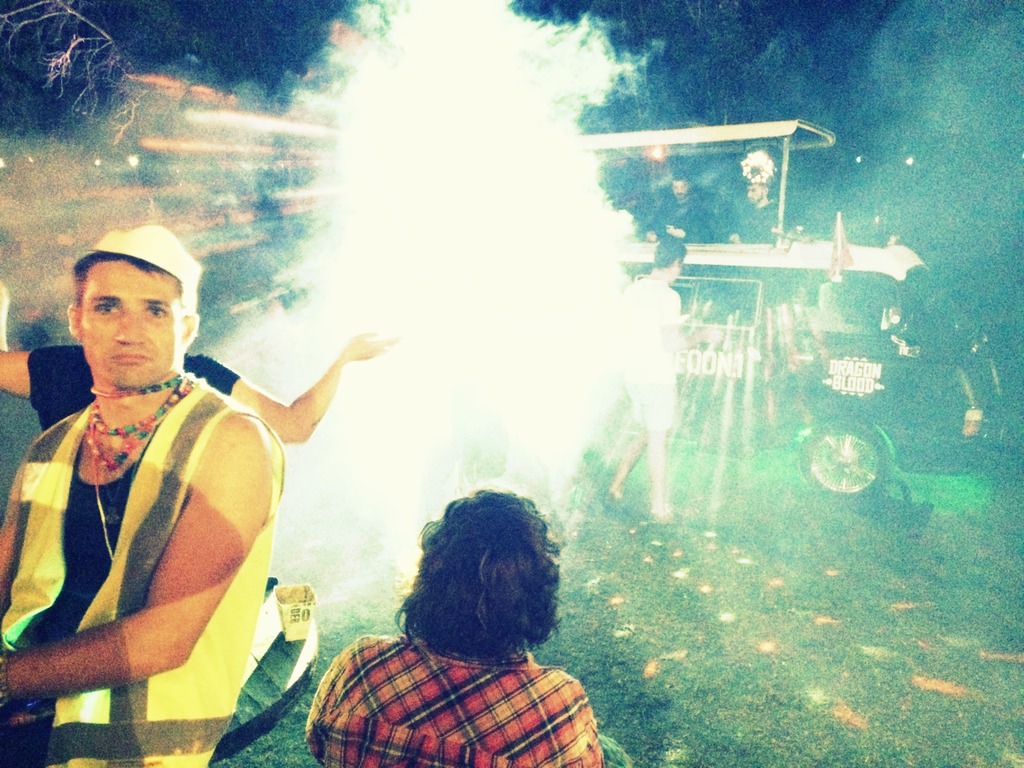 This guy engaged mum in a conspiritorial conversation which she couldn't hear a word of, but caught "police" and "injustice" 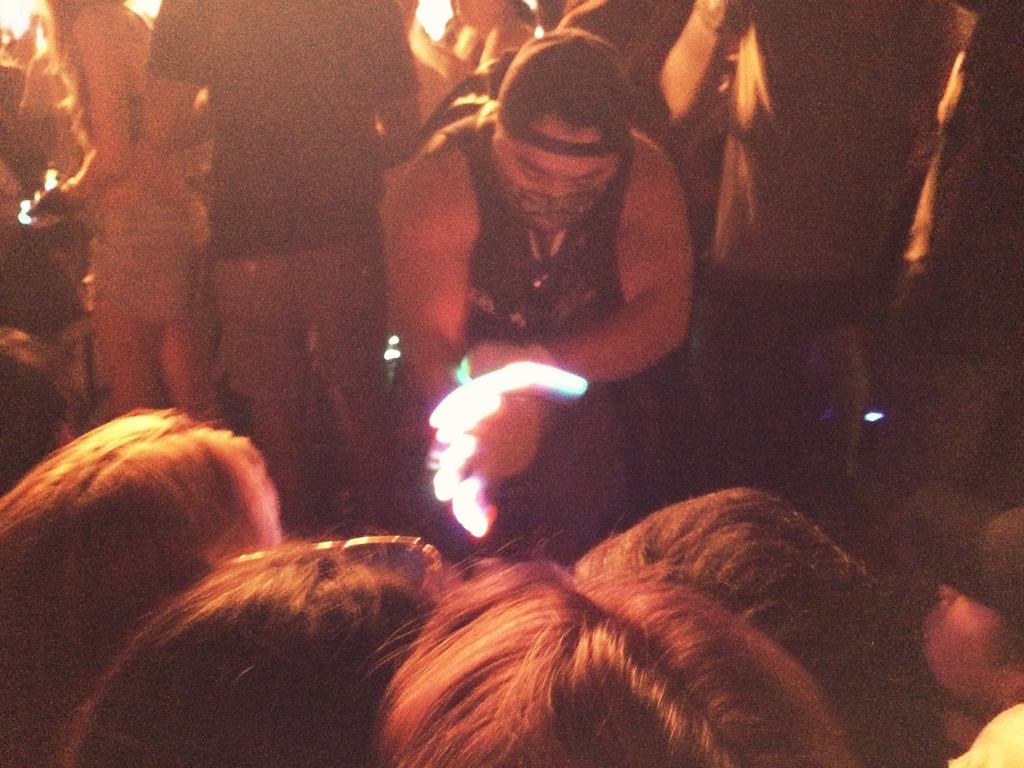 Mum and some kids being wowed by twirling finger lights

So here's the thing. I found it impossible not to dance to these beats; I was trapped in a shuffling equivalent of The Red Shoes. So why, oh why, was there hardly anyone else dancing, anywhere? I had heard that the dance crowd was very loving, ecstatically so one might say, but immobilised? What’s going on? At the main stage, blasting unz/unz and doof/doof like there was no tomorrow, I found myself surrounded by a sea of mooning couples swaying languorously to some piper in their heads. Come on guys, you invented shuffling and you're fantastic at it! Occasionally, some muscle-bound Adonis would break into a high-octane burst of spectacular shuffling, and this was truly a wonder to behold.

Okay okay, despite my efforts I must admit that actually, it WAS impossible to dance to some of these beats. At the Purple Stage, a hardcore platform now with added hardness, the beat was so hectic one would have to be a hummingbird to keep up. Perhaps this was why so few were dancing. And sadly, increased exposure to the different genres did not improve my understanding nor ability to identify each. The best I could muster was a perplexed 'faster/harder' or 'slightly less fast/hard'. In fairness, I was not helped by any of the MCs who, it became apparent, would be rendered speechless if "hard, fast, fuck, shit, make some noise" was eliminated from their vocabulary.

Easier to love were the pyrotechnics of the closing ritual and this from someone who has become jaded with Sydney NYE fireworks. Earlier before nightfall, a huge burst of flames resulted in a circulating, menacing ring of black smoke that held its shape in the sky - a kind of dark underbelly Lord of the Rings motif. But now, as sounds merged and mushed and I began to limp from my exertions, it was time for a nice cup of tea and a good lie down, so DD and I meandered back, past the gymea lilies (mums notice these things), past crazy-eyed revellers holding up cyclone fences, past security guards sitting on hapless lads who should have stuck to dairy and into the black night with smug thoughts of my dancing prowess (for my age), and the resolve to explore more complex, tune-respectful techno having been well bitten by the hard and fast bug of electronic dance music. 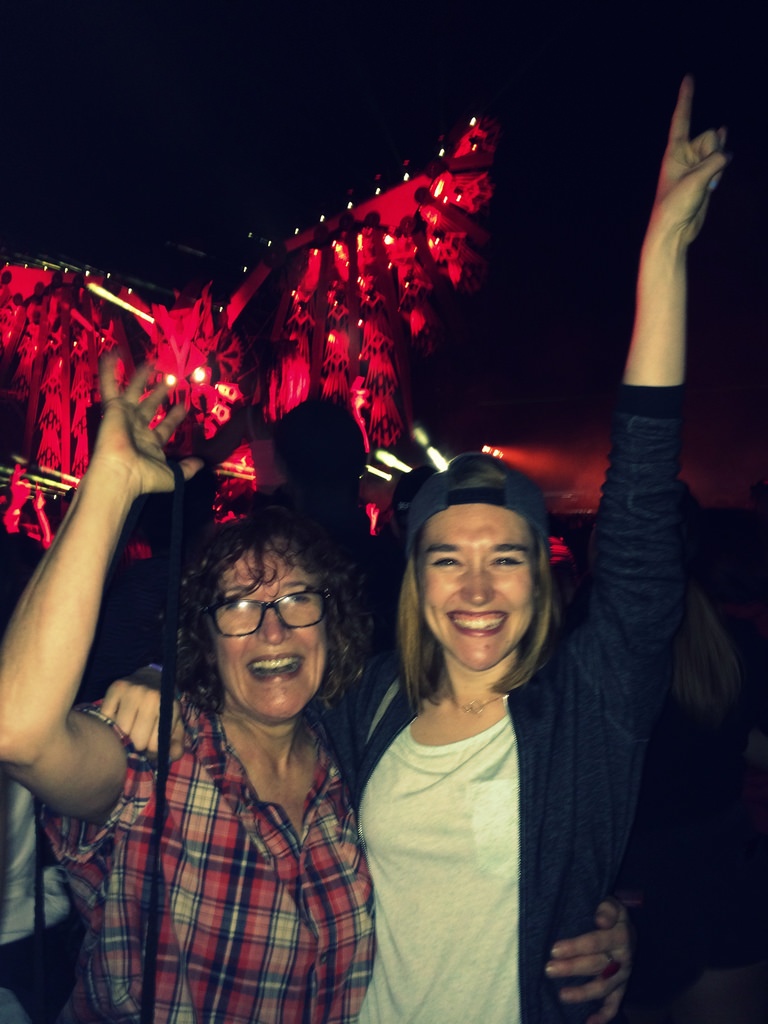 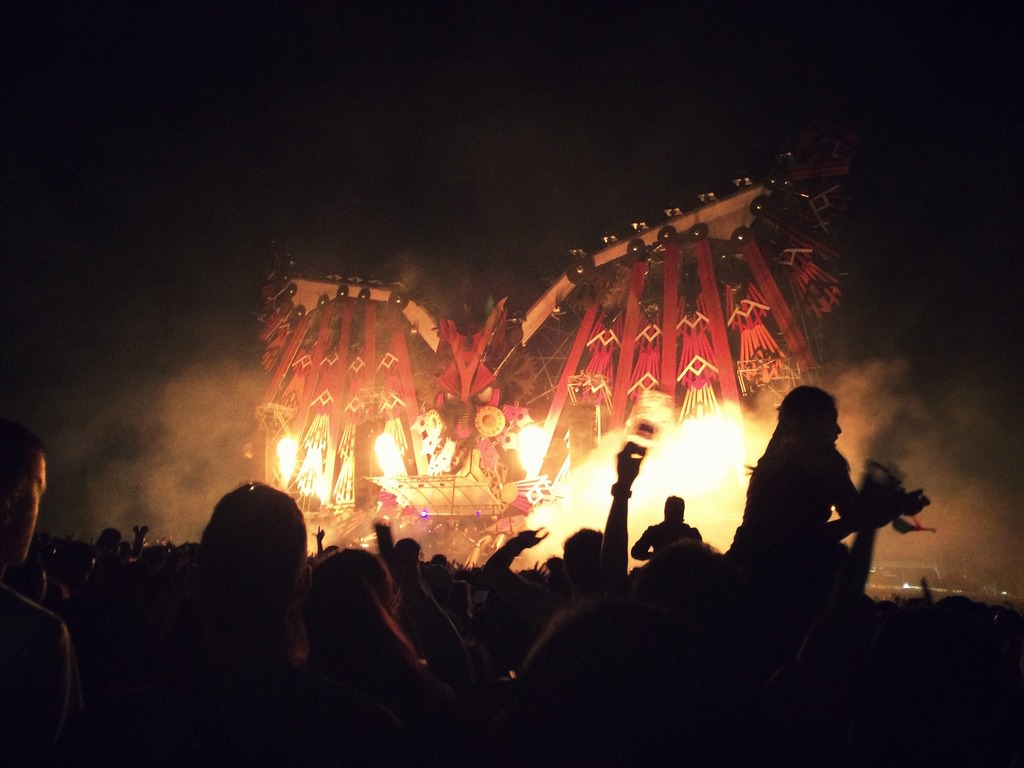 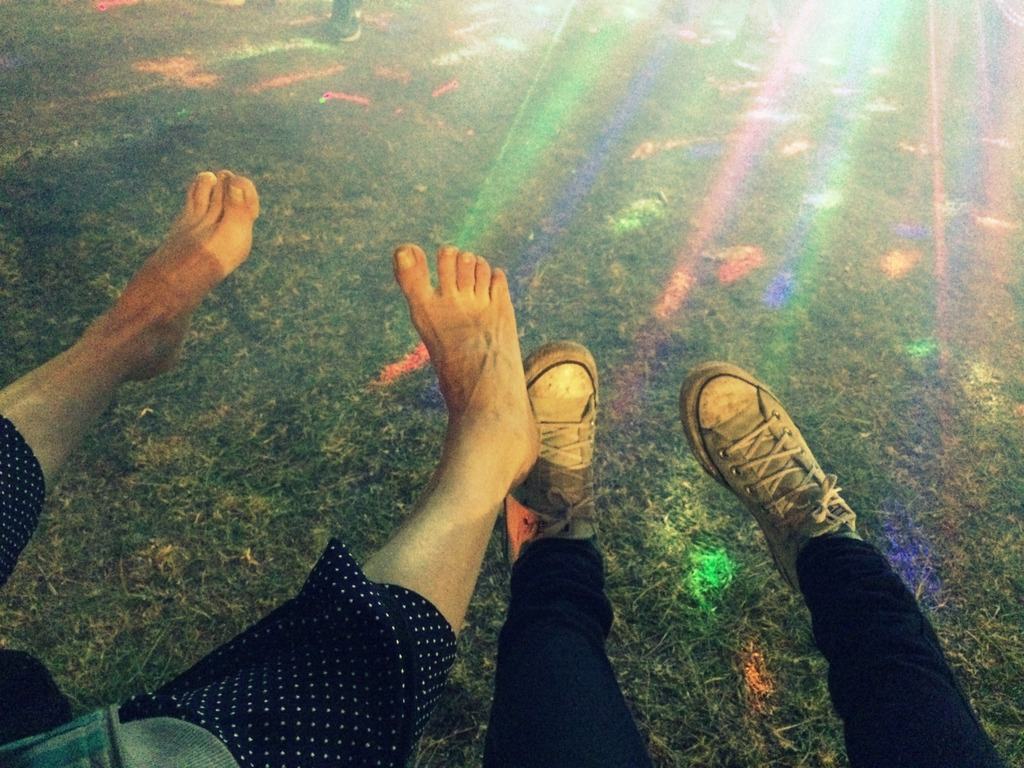